Showing posts from December, 2010
Show all

A  very happy Lucy New Year to everyone! Tonight balls will be dropping all around the country bringing in the New Year.  Everyone will be celebrating the onset of the New Year in his or her own way.   These are my plans: As I sit here at my computer on this sunny, cold Friday morning on New Year's Eve, I think back to the past year and wonder in shock and awe at how fast this past year flew by.   Each year as I get old the days, weeks, and months and even years fly by like the pages of those calendars in an old Forties movie.  That's my life flipping by folks!  Wow.  Time is running out.  This old hourglass is almost out of sand. So did I have a good year last year?  I certainly did.  Every day I can get out of my bed and put both feet on the floor and have my wits about me, is a good day.  And last year I was able to put feet to the floor for 365 days!  Yes indeedy, it was a good year.  And for that I am very thankful.  Thank you oh Great Spirit in the
14 comments
Read more

Fate: the   universal   principle   or   ultimate   agency   by   which   the   order of   things   is   presumably   prescribed;   the   decreed   cause   of events;   time:   About four o'clock this morning as I lay in bed as I was arousing from my deep nighttime sleep I got to thinking of how much the course of my life has taken by chance circumstance. I am not a religious person.  Even though I was raised as a Christian in the Baptist faith, I was quickly dissuaded from that belief when I was about ten years old.  That was when I realized that the formal church had damned me for eternity because I was homosexual. I knew something was wrong because that was the way I was born.  Thus, at only ten years old I lost faith in "man made religion".   However, I do believe in Fate.  Some may call Fate a Guardian Angel.  I do believe that my life has been Guided.  By whom or why, I don't know exactly why.  Maybe I'll find that out when I die.  I doubt it t
19 comments
Read more

The Day After - Still Digging 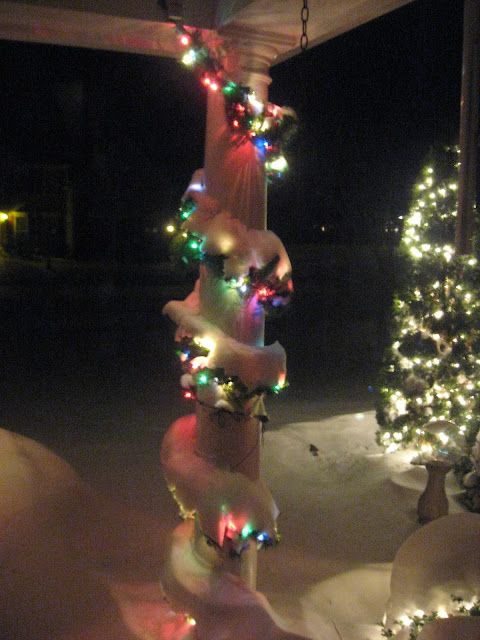 As I type today's blog entry I hear the whirl of  snowblowers in the neighborhood.  Yes folks, here we are on Day Two after the big snowstorm, the Christmas Blizzard of 2010.  Still digging out. Now I know we're all a bunch of Snow Wussies down here because we just ain't used to all this snow!  I estimate we had about 8 to 10 inches of snow in our neighborhood, which is about 9 more inches than we receive ALL WINTER.   Well, the sun is out but the temperatures are still hovering around the freezing mark.  Later this week we will experience the downright balmy temps of 50 degrees.  A regular heat wave.  That should get rid of the rest of the snow.  Who wants to see 14 foot piles of snow in the Food Lion parking lot until spring?  Not me for that's for sure! Pictured at the top of this blog is my neighbor Rich.  He wasn't too happy because he paid $25.00 to have his driveway cleared out yesterday, only to have snow cover it up again last night.  He claims
4 comments
Read more 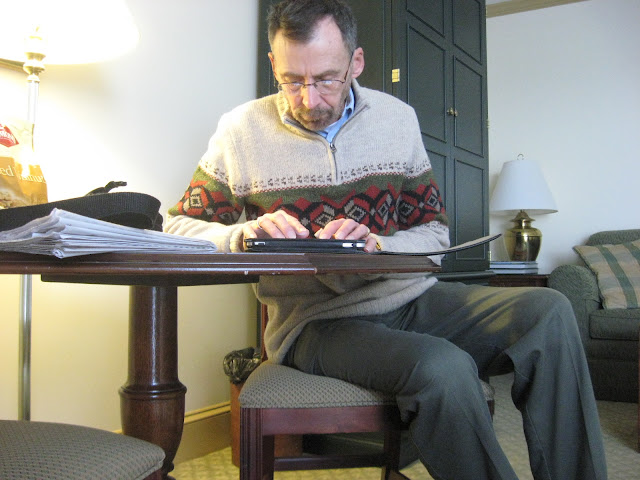 M e on my iPad in my fancy, dandy hotel room last night, checking my e-mail before I collapsed into bed I'm back home!  I can truthfully say there really is no place like home. Yesterday I had to stay overnight at the hotel where I work the front desk.  My shift was from 3 pm to 11 pm.  Significant Other drove me to work in his four wheel Jeep.  That got me to work.  I brought my suitcase just in case I had to stay overnight.  That turned out to be a very wise decision. As the hours progressed yesterday evening the Christmas Blizzard of 2010 became fiercer to the point where it would have been foolhardy to expect Significant Other to come in and pick me up at the end of my shift. So I stayed at work, going outside every hour or so to shovel snow away from the two entrances to the hotel.  Now wasn't that some fun with winds gusting up to 50 mph?  I almost got blown against the wall a couple times by some exceptionally strong gusts of wind that had to be more than 5
7 comments
Read more

Are We In Minnesota?

- December 27, 2010
Here I am, at the hotel a 7 a.m. in the morning.  Yes, I stayed overnight.  Snowed in. Are we in Minnesota? Now I have to go and shovel more snow.  Who said they "just love the snow?"
6 comments
Read more
- December 26, 2010
Four years ago I moved to southern Delaware to retire. I moved for several reasons, the main reason being to escape the high Pennsylvania taxes. Another reason was the slower paced life in Delaware. Where I moved, the Rehoboth Beach/Lewes/Milton area on the east coast also has a high population of older gay men and woman who have also retired to southern Delaware. After a lifetime of homophobia, it was a pleasure to retire to an area where I would be accepted as who I am. Another reason I moved to southern Delaware was the milder temperature. Southern Delaware is location one temperate zone below where I lived in Pennsylvania. I was told that it doesn't get as cold in Delaware and, this is a biggie, not as much snow. As a matter of fact, I was told when it did snow it rarely lasted more than a day. That fact was true the first three years I lived in lower slower. Not last year. Remember the back to back blizzards in January? Oh yes. Fun times. However, I was lucky that I di
2 comments
Read more

The Day After Santa 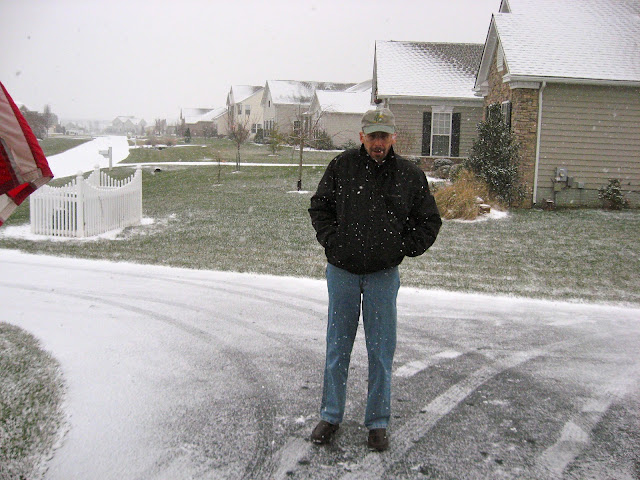 Ron on ice earlier this morning Another Christmas has come and gone.  Doesn't it seem like Christmas rolls around faster and faster every year?  Maybe it's because I'm older but the years seem to fly by like those calendar pages flipping ahead in those old 40's movies.   Our Christmas here in Lower Slower was very quiet.  We only had one family in the hotel, a Jewish family.  Of course I made a faux pas when they exited the elevator yesterday morning and I greeted them with a big, cheery "MERRY CHRISTMAS ! "    Count on Ron to put his size 12's in his mouth.   They were nice about it though.  A young couple with their 3 year old daughter about to turn 4 years old next month.  Obviously they rented a room at the hotel to get away from all the Christmas hub-bub in Washington D. C. where they lived.  Way to go Ron. Today we have a MAJOR WINTER SNOWSTORM forecast.  Oh joy.  And I have to work again today.  Yes, if you have been following my blog
2 comments
Read more 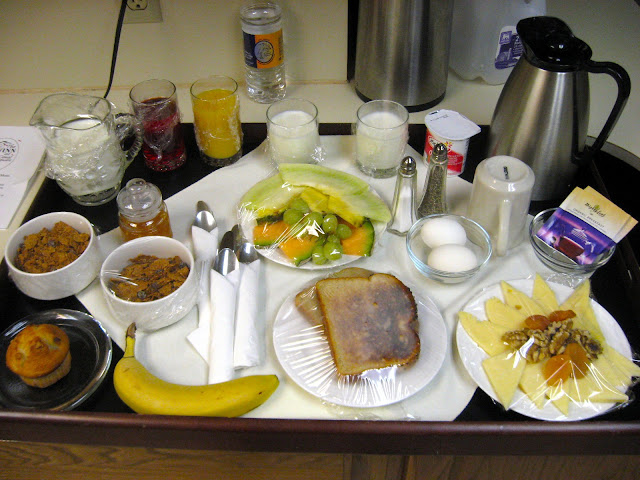 Breakfast Tray this morning at the hotel  As regular readers of this blog may know, I work part time at the front desk at a boutique hotel in Lewes, Delaware.  My normal schedule is Wednesday and Thursday evenings.  I also fill in for the full time front desk clerks when they go on vacation, are sick or having a baby.  In fact, many of the jobs I've had in my adult work career are as a result of filling in for a pregnant worker. That is how I got my first job at Girard Bank in 1965.  I stayed on that job 21 years!  But I digress (again he says). What my blog post is about today is how I spent my Christmas Day.  First thing this morning  I drove the six miles down Route 1 got Rehoboth Beach to drop off the Spo-shirt that I received yesterday.  I tried it on, took my pictures and posted them to my blog so now it is official, Spo-shirt has made a visit to Casa Tipton-Kelly.  The next stop for the Spo-shirt was my friend, The Cajun.  He lives in an apartment on the second land
6 comments
Read more

Look What I Got in the Mail! 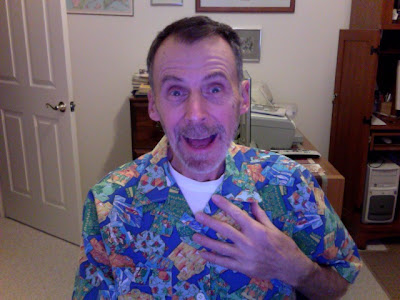 Me in a "Spo Shirt" I returned today from work at the hotel and I had two packages awaiting me.  One was my new DirecTV DVR receiver.  My old one gave out last week.  DirecTV sent me a new one.  I would have to set it up all by my little self.  I hate dealing with all these wires and technical stuff.  So, I got down to it.  I wanted to get everything done (the TV is in my bedroom) before it got dark.  I was dreading this. I called and lo and behold I got a technician on the FIRST RING.  And this is Christmas Eve!  His name was Adam and, together, after about an hour, we SET IT UP.  My TV and DirecTV DVR are now working in my bedroom. Then my second package. I had ABSOLUTLY NO IDEA who this package was from.  The return address said "Hanuman Das" from Springfield, Massachusetts.  WTF?  Do I have a secret admirer?  Wow!  So I open the package and the first thing I see is a "Disco" notebook.  WTF?  I pull out the bubble wrap.  LOTS OF BUBBLE WRAP.
15 comments
Read more
More posts