Showing posts from May, 2013
Show all

"How Well Do You Know Ron" - And the Winner is: 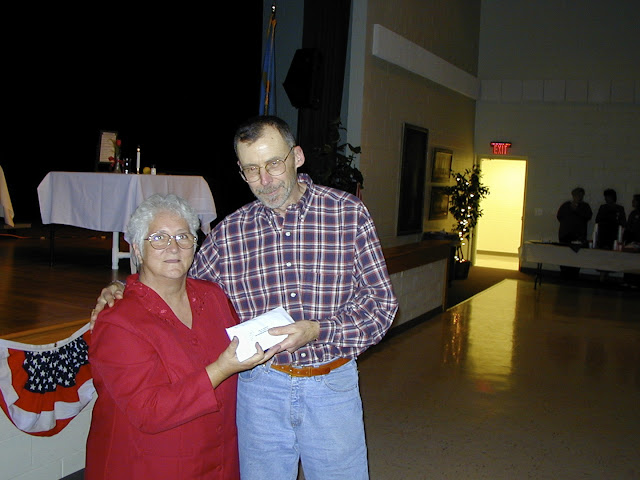 Me, being presented with the winnings of a 50-50 drawing at the Veterans Day Dinner in Millsboro, DE - 2005 This photo actually appeared in local newspaper! ($242 was my winnings) All right, time is up folks!  I thank the Usual Suspects took the time to answer my little fun quiz about myself.  You all are my blogger base and I appreciate all of you and the time you took (and consideration) to venture your opinions about what makes me tick. I have highlighted my answers in blue. Which Good Samaritan activity would I volunteer for? Soup kitchen Habitat for Humanity house building Roadside litter pickup crew Big brother to a fatherless little boy What stupid daredevil stunt (that I haven't done already) would I do if given the opportunity? Bungee jump Ride white water rapids Sky dive Hot air balloon ride What physical attributes are my type in a man that immediately catches my eye and makes me weak in the knees? Medium height (5'10"), slim (140-170),
13 comments
Read more

How Well Do You Know Ron? 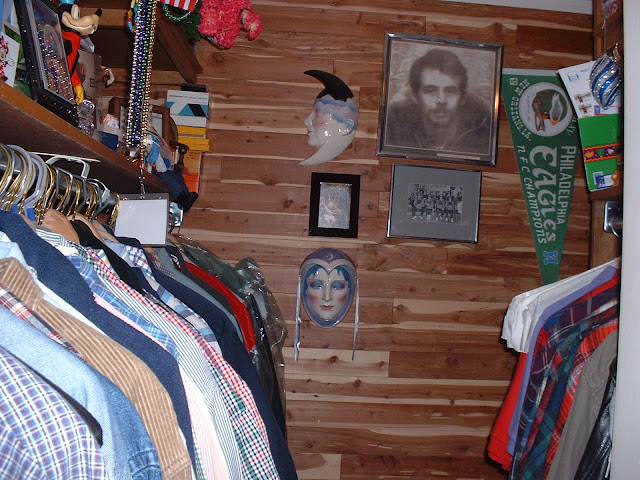 My closet in our Pennsylvania house Time for a "fun" blog posting.  It has been awhile since I posted a quiz/test blog so for all of you who like this kind of whimsy, here is your challenge today:   I am posing four questions, all with truthful answers (non made up).  Choose the answer which you think best suits my personality.  The first place winner will receive an autographed picture of me sprawled nude on a beach in Provincetown, Mass (taken when I was much younger and still had an intact bod).  Second place will receive a one way plane ticket to Midland, Texas to visit the new George W. Bush Library.   Ready?  Fasten your seat belts and suspend your belief because here we go with the "I can't believe this crap" life of Ron: Which Good Samaritan activity would I volunteer for? Soup kitchen Habitat for Humanity house building Roadside litter pickup crew Big brother to a fatherless little boy What stupid daredevil stunt (that I haven'
24 comments
Read more 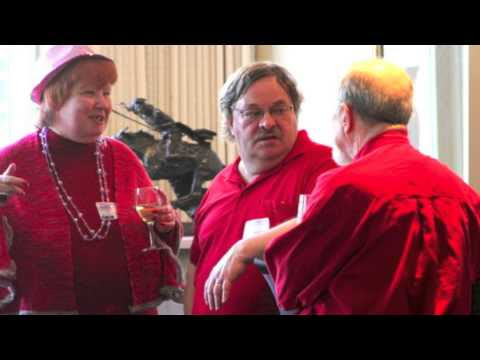 Well folks, I finally did it.  I put together Mark's great photos and produced an iMovie of the Bloggerama.  I worked all day on this movie.  I am exhausted.  Wiped out.  I'm "movied" out.   Many, many thanks to Mark of "Our Simple Lives..." for his outstanding, mood capturing photographs.   Mark - friend and photographer extraordinaire  Enjoy!
33 comments
Read more

Ron and Lar in Rehoboth Beach 2012 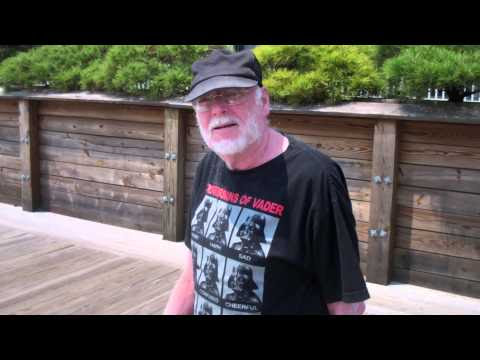 Coming up on another year when I treat my longtime friend Lar to a lunch and old time photo in Rehoboth Beach.   When Lar and I met, 3rd grade 1951 - Larry is in the third row in the back, second from the left (right in front of our teacher Miss Ezrah) - I am in the third row in the back far right next to Margaret West, the tall girl with the braided hair Larry met me in third grade after he called me out to our teacher Miss Ezrah on plagiarizing a book report from a Scrooge McDuck comic book story.  What did I know?  After class he saw me on the playground and thought I was going to poke him in the nose.  Instead I said "You have comic books to trade?"  I don't remember this incident but it sounds like me, the Opportunist. Larry and I with our third grade teacher in 2004 - she was 98 years old and still remembered us!    Lar made this iMovie of a video we both took last year celebrating his 70th birthday.   Larry (far left), his date Pam and me (f
22 comments
Read more 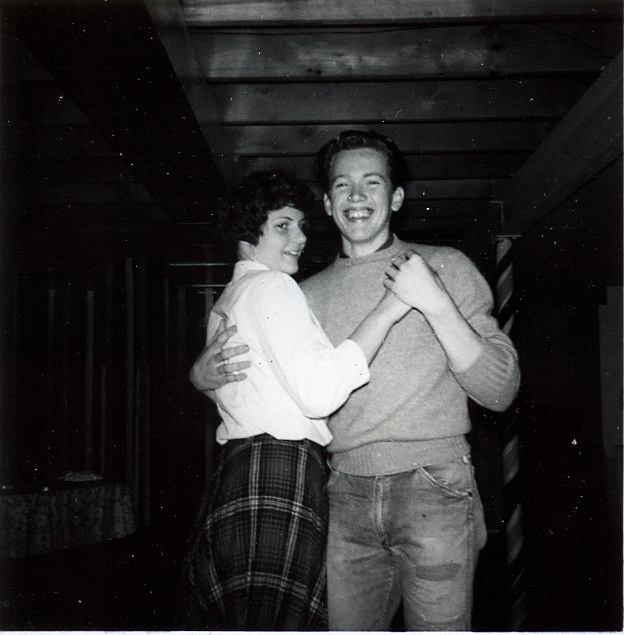 Sonia and George - 1958 I haven't been to many birthday parties in my lifetime.  The first one I can remember was when I was about five of six years old.  I was either in first or second grade.  The party was for a classmate of mine named Duer Smedley.  Of course I have no pictures of that party but the two things I remember clearly.  There were a lot of kids there and we played "Pin the Tail on the Donkey" which I remember as being great fun.   Me at the time of my first party - 1948 The next birthday party I can remember going to was for my longtime friend Larry.  It was his 16th birthday party.  I was 16 also and I took a date.  Her name was "Patty".  I won't mention her last name because we are still friends (class reunions) and I don't want to embarrass her. The two things I remember about his birthday party was that I had a date, Patty.  I didn't have a car.  I think Larry picked up us, I'm not sure (I am sure he will correc
12 comments
Read more 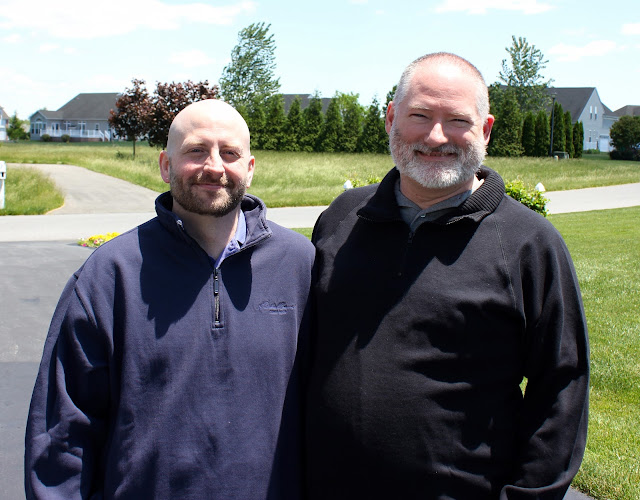 Sean and Jeffrey Every now and then I get to meet one of my blogger friends in person.  Today was such a day.  Sean and his husband Jeffrey were visiting another fellow blogger this weekend and stopped by for a visit this afternoon.   Sean and Jeffrey met the elusive and reclusive  "Bill", my longtime partner and husband to be (this July)!  Bill loved them, as I knew he would.   While Sean and Jeffrey were here another hot blogger friend of ours called me on FaceTime.  That hottie was (and still is) Dr. Spo of hot Phoenix, Arizona.   Dr. Spam Spo After chatting with Bill we all took off to Rehoboth Beach to drop in on another fellow blogger, The Cajun.  Of course he was DELIGHTED to see us.   Prior to "dropping in" on the Cajun, we had to find a parking place.  Rehoboth Beach has new parking meters that you pay by credit card.  It was a pleasure watching these two (Sean and Jeffrey) figure out how to coordinate their credit card with the par
16 comments
Read more 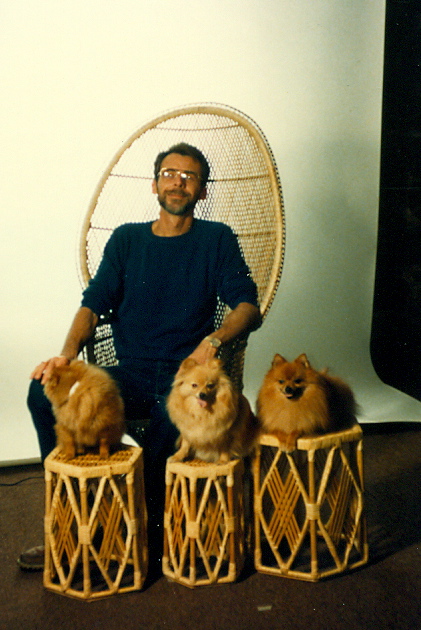 September 1985 - me, Baby Doll, T and Horace - posing for our annual Christmas card photo As regular readers of this blog know, I am fond of posting old family photos.  By old, I mean the 40's and 50's.  I think I have just about exhausted posting those photos so now I have moved up to my next surge of photo taking, which occurred in the 80's, when I was in my 40's.  Poet and don't know it. Here are some photos that I took (which can now be considered family photos since they are almost 40 years old) during one of my annual photo shoots with our dogs.  Back in the early 80's, when I first acquired Horace, my male Pomeranian dog, I had a Christmas card photo produced to share with friends and family.  That Christmas card was so popular that I began to take annual Christmas card photo shoots even though it cost me over $1,000 each time.  Back in that day I had a good paying job with a major Philadelphia bank and I could afford such frivolities.....and I did
12 comments
Read more 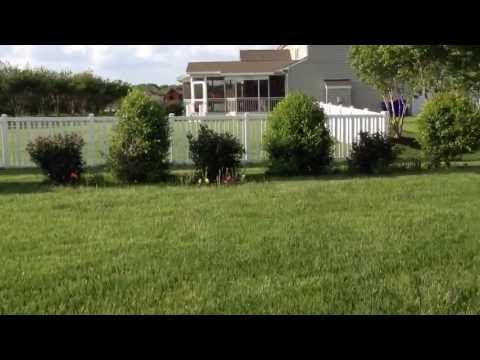 Home here today friends, in the land state of the free and brave where marriage equality is a reality.  Not for us some backward southern or western state (and even some northern states, hear that Pennsylvania and New Jersey?) that continue to discriminate against same sex couples entering into the committed and loving relationship called marriage. Here are a couple of short videos I took last week of the grounds here around Casa Tipton-Kelly (our home) here in Sussex County, Delaware.  Even though all five of our state legislators voted against marriage equality for same sex couples, we gay folk here in Sussex County live in perhaps one of the most open minded and accepting communities in the United States.  Even though Sussex County Delaware had the fourth largest gay population of couples, we can now get married in spite of all five of our state legislators who continue to myopically vote against us for full equality. I meant for this blog posting to be all light and airy to o
8 comments
Read more 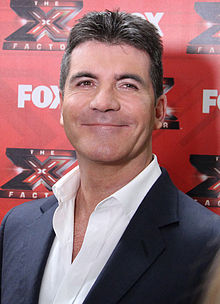 Simon Cowell This is an open letter to the producers of "American Idol."   I've tried folks, I've really tried to keep my blog postings positive and upbeat but after reading how the ratings of "American Idol" have plummeted 20% this season, I feel it is now time to put my two cents in the Reasons Why. The judges (?) on "American Idol" Three years ago when Simon Cowell announced that he was leaving "American Idol" my first thought was "there goes the show."  Hey folks, I'm not one of these hot shot program experts but I do what made "American Idol" work and that was Simon's honest if sometimes caustic comments about and to the  contestants.  Say what you want about Simon, you all know he always told the truth.  I wasn't one of those lily-livered panty waists who got all offended when Simon delivered one of his no frills criticisms of a performance.  Bill wouldn't even watch "American
14 comments
Read more
More posts