Showing posts from April, 2018
Show all

"the Price is Right!" Appearance 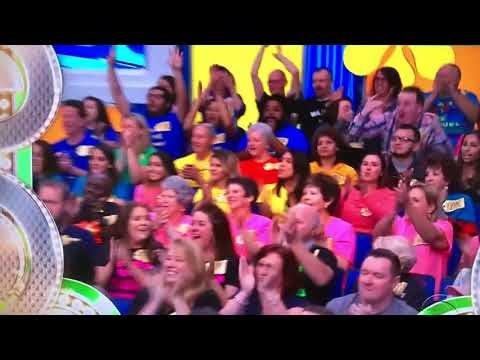 There it is! Yesterday, right at the beginning of the show, as the camera panned the audience of "The Price is Right!", there we were!  Me and Pat were in the back row, with black T-shirts, clapping it up as directed.  This is our fourth appearance in the audience. Have yet to be called to "Come on down!" but we know people who were.  Folks that we talked to in line. One lady even won a car! Even though we weren't called to join Drew Carey on stage, we still have a great time. Attending a taping of "The Price is Right" is like attending a party.  The staff of the show has the four hour wait in line seem like a tenth of that time. They keep us entertained. And we get to met new friends while waiting in the line.  It's all good folks. Maybe next year we'll be called. One thing is for sure, we'll be there again in the audience. There is Pat in the back row with his arms raised above his head. I am to Pat's left.
10 comments
Read more

"The Price is Right!" 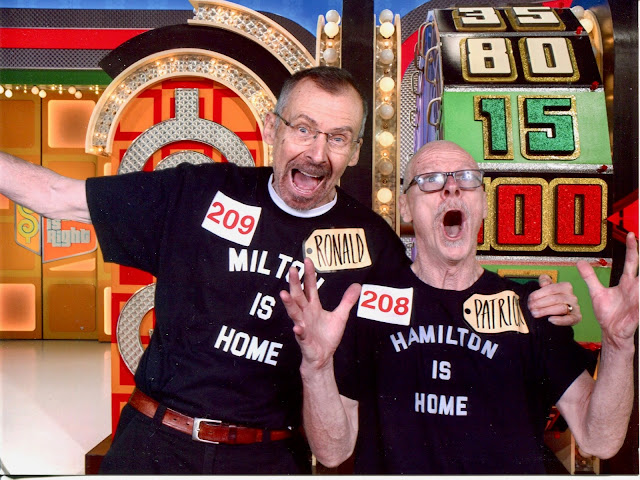 Me and Pat practicing wining! We're ready! Just a reminder folks, tomorrow is the day Pat and I will appear in the audience on "The Price is Right!" Pat and I taped the show when we were in California last February during our annual Get Away From The Cold Weather vacation.  This was our four taping of "The Price is Right!" Last year we attended two shows, they were short of an audience for the second show and they asked for volunteers. We volunteered.   We have yet to be called to "Come on down!" but we know people who have been called.  Two years in a row people we talked to right next to us in line were called to "Come on down!"  I doubt if we'll ever be called but it attending the show is a lot of fun. The staff at "The Price is Right" have a such a smooth operation you hardly know you've been standing in line for four hours until they usher you in the building for the taping.  Oh I know we're being use
6 comments
Read more

Bill Gets His Legs Treated 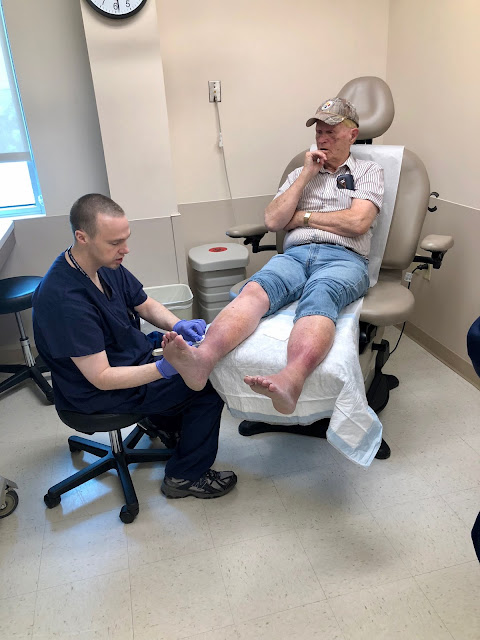 Bill's doctor treating his legs Bill got his legs treated today.  What a relief! Bill said he never in his life got so much attention from a medical staff.  Seeing this attention to Bill's medical condition almost brought tears to my eyes.   Bill is not one to complain about his health. He just plows through. But his legs got so bad that he couldn't sleep at night because of the pain.  He finally asked me to check into getting some care for him.  Bill getting the full attention - eventually five workers were tending to Bill's legs (I tried not to be too disruptive taking these photos) Bill has been under VA care for thirty-four years, since he was 55 years old (he's now 89). We've been lucky over those years that Bill hasn't had to use the VA for much of his medical needs other than medication. There was an emergency in 2001 where he had to have his gall bladder removed.  I almost lost him then.  He was in intensive care at the Philadelphia V
13 comments
Read more

Back On The Medical Treadmill 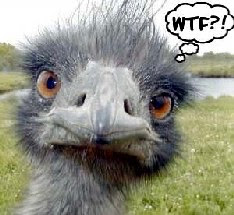 Looks like we're back on the medical treadmill again.  Thursday my appointment for my semi-annual blood test at the VA Outpatient Clinic in Georgetown. I see my doctor this week on May 1st for the results of that blood test. Always a nervous time because of my past history of prostate cancer. So far since my seed implants a back in 2013 (was it really that long ago?) my PSA score has been down. Hopefully I get the same results this time. Yesterday I had an appointment with my dermatologist. I had a couple of pre skin cancer spots that had to be burned off. They're scabs now.  I had a little dustup in the office when I was asked to fill out AGAIN a six page form of my medical history. WHAT?  I just filled that out the last time I was there eight months ago.  I noticed that everyone in the office was new. Guess they threw out all that paper work I filled out last time.  I think I've filled out at least four times paper work in that office. And I didn't even get t
11 comments
Read more 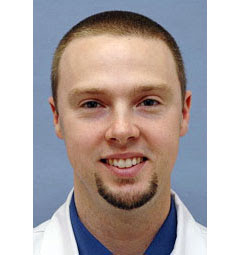 Bill's appointment for his edema is scheduled for next week. It was quite an arduous procedure that I had to go through to get approval for him to get medical attention outside the VA system.  The Choice program is great once everything is in place. But getting there is a challenge. I don't know how an older person who is by them self would be able to navigate the system.   First I had to schedule an appointment with his VA care provider. They have to evaluate his situation (a "consult") before he can be recommended for care outside the VA system. Once that is done (not always a guarantee) then I had to wait for a call from the main VA facility in Wilmington advising me that HealthNet would call me with an authorization number. Each medical situation has to have its own authorization number. Then to coordinate Bill's VA medical records with his new doctor, who is pictured above. Folks, Bill's new doctor is Doogie Howser. Yes folks, that's not an
14 comments
Read more 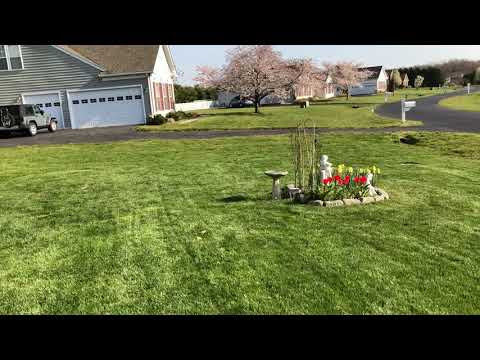 Oh my gosh! I DO believe spring has finally arrived. Check out this video that I took this morning.  Sun, warmth, color and wind.  Spring is here!   I see my last posting to this blog was last Saturday. Looks like I'm going to default to a weekly posting, at least for the foreseeable future.  You may ask "What's going on Ron?"  Just too busy with daily like folks.  The past two weeks I had to arrange through the Veteran's Choice program to have an outside provider see Bill for his leg problems. Bill had a bad case of edema. I would post pictures but they're too gross.  Take my word for it, he has a bad case of edema. His legs are infected and oozing a clear liquid. The Veteran's Choice program is a great program but I do have to jump through a lot of hoops to get him treated. First I have to arrange an appointment with his provider at the VA Outpatient Clinic in Georgetown. They evaluate his condition and then decide to issue a "consult"
10 comments
Read more 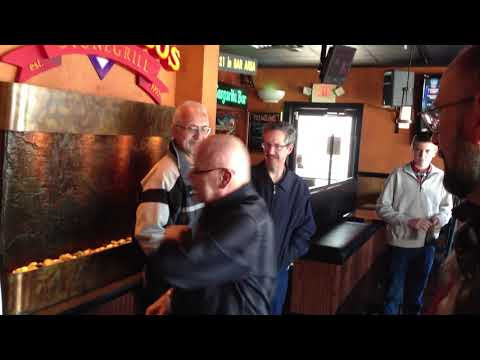 This spring I am again reminded of the first Bloggerpalooza that was held in Lewes, Delaware back in 2013. Hard to believe that it was only five years ago.  We had another Bloggerpalooza the following year in 2014. Haven't had one since then unfortunately. I'm not sure if we will ever have another blogger reunion like this in Lewes again but we do have our memories recorded in video and photos. Me dominating the conversation (as usual) with The Cajun and Dr. Spo, David Jeffreys, and others - 2013 This video is of the surprise visit we made to Wayne "The Cajun" Juneau at his place of employment, the Dos Locas restaurant in Rehoboth Beach. I did not warn Wayne that we would be descending on his popular restaurant on that fine spring Saturday afternoon for lunch. Wayne, the professional that he always was, accommodated us with grace and dignity.   Wayne is gone now, he passed away the following year but he has left his indelible mark. Wayne is the reason I
6 comments
Read more 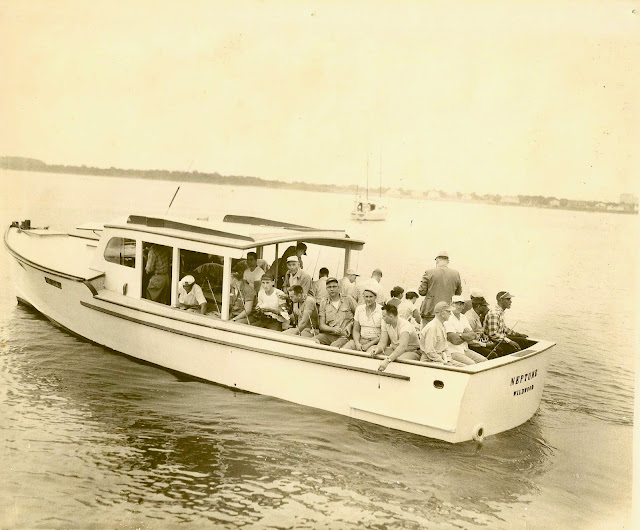 My father Isaac (third from left in front) with his brother Ed and my cousin Bud during a fishing trip at Cape May, New Jersey - 1957 My father was never close to me. I suspect he didn't want kids.  I am the oldest of his three sons. I think at first he may have been vaguely interested in the novelty of having a child but when he found out I favored my Mother, he quickly lost interest in me.  The best I can say about my father is that he never abused me, either physically or sexually. Thank goodness for that. I've heard horror stories from others whose fathers did abuse them, both sexually and physically. Oh sure, we got "whippings" (with a belt, but no buckle) but no serious damage was done. The "whippings" were more to get our attention and a staple of raising children in the Fifties.  My father was indifferent and often annoyed by his three sons.  However, he did favor my youngest brother. Brother John was "the pet." A fact I greatl
6 comments
Read more 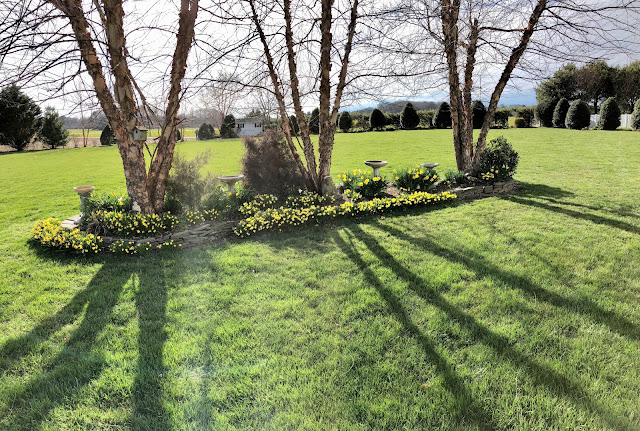 Our oval planter Easter Sunday, the lighting was just right Our cold spring continues. Last week we had a few days in the 60's and even one day the temperatures reached 70 degrees. I loved that! However, today we're back to the high 30's and the cold winds. Spring, oh when will you arrive?  Probably what will happen we'll go straight into the hot and humid days, as has happened so often in the past years. The past week I've accomplished a lot of yard work outside.  I love doing yard work. For me, it is a form of relaxation. I'm reading a wonderful biography of Rock Hudson. Rock also found doing yard work on his three and half acres of land in the Hollywood Hills his favorite form of relaxation.  Hey, something I have in common with Rock Hudson (smile). Last week I had delivered six cubic yards of mulch. Every day I've spread at least four wheelbarrows of mulch. The best kind of exercise.  Maybe I can make a dent in those love handles that I'v
11 comments
Read more 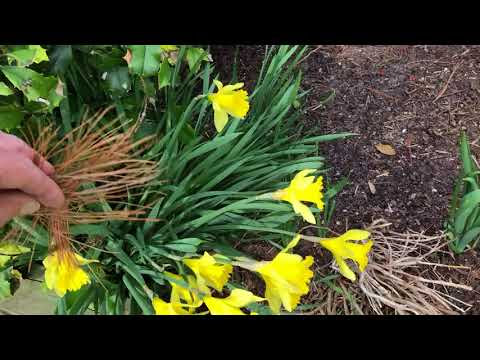 Easter, a sure sign that spring is finally here. My daffodils are in full bloom. As my regular blog followers know, I haven't updated by blog for over a week now. My lame excuse is that I'm "just too busy."  Well, I have been busy stamping out the usual campfires.  This past week I've been laying mulch every day. Also, creating stone walls. I love doing this kind of work in my back yard.  I find it so relaxing. Only problem now is how much can my body take?  I have to ration out my physical exertion. So far I'm doing good.  Yesterday I took a video tour of my daffodil blooms this year. I've always wanted a property in which a profusion of daffodils burst into bloom welcoming spring.  Planting all these bulbs in the fall took a lot of effort folks. There were times I thought "Why am I doing this?  It is so cold outside".   But now that I see the burst of yellow around our almost one acre (.98 acres) I know my effort was well worth it.
14 comments
Read more
More posts